by Melanie May | 7 min read

A History of Cars Manufactured on the Emerald Isle

Ireland has given the world colour photography, submarines, Guinness and Bono – you’re welcome – but Ireland isn’t exactly known for its contribution to the motoring world.

Ireland doesn’t initially spring to mind when talking about great car manufacturing countries, but Ireland does have an interesting automotive history, especially for such a small Island.

Actually, three cars have been produced on these shores as well as many others that were assembled in factories from CKD (complete knocked down) kits.

The most famous car made in Ireland is the time travelling DeLorean DMC-12.

In the mid 1960s American engineer John DeLorean helped create the iconic Pontiac GTO. In 1975 he set up The DeLorean Motor Company to build his own dream car, one that he wanted to be “fun to drive, safe to operate, and long-lasting.”

The first DeLorean DMC-12 prototype arrived in 1976. It was designed by Giorgetto Giugiaro of Ital Design, Lotus Cars provided the frame and suspension and the engine was from Renault. It had futuristic gull-wing doors and longer-lasting unpainted stainless steel for the body.

A manufacturing plant was originally to be built in Puerto Rico but the British Government offered DeLorean a financial incentive to build in Northern Ireland and in 1978 construction work began on a six-building, 660,000 square foot plant in Dunmurry in Belfast.

There were 2,000 employees at DMCL (DeLorean Motor Cars Ltd.) but the workforce was not from a car manufacturing background and as a result build quality was an issue. Production was plagued with problems and several parts had to be redesigned. Overspending and additional costs delayed production by a few years. The first car finally rolled off the production line on 21st January 1981.

Initially, there was lots of interest in the DeLorean but the $25,000 price tag was very expensive, especially for a car that could just about reach 130mph (209km/h) and 0-60mph in 10.5 seconds. Due to a lack of sales and other financial problems, production of the DMC-12 halted in February 1982 after just 8,500 cars had been produced.

Today, the DeLorean DMC-12 is a cult classic thanks to its starring role in the ‘Back to the Future’ movies and they sell for double the original price. Great Scott! 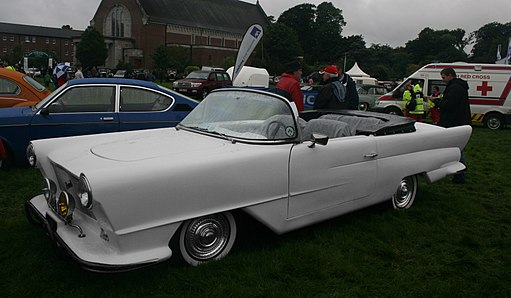 The Shamrock Car was also made in Ireland, sure where else could it be made with a name like that? And much like the DeLorean it was the dream car of an American named William Curtis who chose to build it over here.

Apparently, while visiting his wife’s family in Ireland, Curtis was struck by the poverty he witnessed and decided that a great way to help the Irish people and economy would be to build a luxury automobile in Ireland and export it to sell in America.

Originally it was to be built in Tralee in County Kerry but that didn’t work out and a 40,000-square foot manufacturing plant was built in Castleblayney in County Monaghan instead.

In 1959, when Curtis was just 27 years old, the first Shamrock prototype rolled off the production line. It was designed by Alvin ‘Spike’ Rhiando, a Canadian ex 500-cc Formula 3 racer. It had a one-piece moulded fibreglass body and was built on a ladder frame with a 98-inch wheelbase. It looked like a 1957 Thunderbird and was nicknamed the Irish T-Bird. It was also described less flatteringly as more “like a parade float than a car” because of its 17-foot length and ridiculously long overhangs.

It was woefully underpowered too with a puny 1.5-litre engine, sporting just one SU carburettor, which produced a paltry 53hp. As result it had a top speed of just 90mph (145km/h) and could go from 0-60mph in 19.7 seconds.

Production halted very quickly and the factory shut down. Legend has it that the fibreglass bodies and other parts were dumped into Lough Muckno. It is believed that just eight to ten cars were produced making the Shamrock as rare as a crock of gold.

In the 1980s the TMC Costin was made by the Thompson Motor Company in Castlebridge, County Wexford. This lightweight sports car was built from 1983 to 1987 as a rival to the Caterham Super Seven and the Westfield, both of which were derivations of the original Lotus 7.

The chassis itself was designed by the famous Frank Costin, he who put the ‘Cos’ in ‘Marcos’. The body was made largely of fibreglass with an aluminium under tray and side panels. The top and rear sections of the body were open and protection from the elements involved attaching an oblong PVC panel to the car.

In 1987, like DeLorean and Shamrock before it, TMC went bankrupt and just 39 cars were ever made. Daniel Panoz, founder of Panoz Auto Development, snapped up the rights to the chassis which was then used to make the Panoz Roadster.

In 1981 in County Donegal, Auto Montan Werkes (ATW) was established to manufacture an all-terrain vehicle named the Chico and nicknamed the Buncrana Beetle.

At the 1907 Dublin Motor Show, Alesbury Brothers exhibited its four-seater automobile, which was constructed entirely of Irish wood and had solid rubber tyres. It was powered by an 8/10hp two-cylinder Stevens Engine, and except for the engine and gear box was wholly constructed at the Edenderry Works factory in Edenderry, County Offaly. Just nine Alesbury automobiles were ever made.

The Thomond featured on a 39-pence Irish postage stamp in 1989.

The Silver Stream was built from 1907 to 1909 in Kilcullen, County Kildare and was the brainchild of Irish railway engineer, Philip Somerville Large. He designed the body himself and it had a modified MAB chassis - manufactured by Malicet et Blin - with a Gnome six-cylinder 3,065cc engine.

In 1909, the completed chassis was shipped to the coachbuilder, Salmons, in Newport Pagnell in Buckinghamshire, England.

The final design was a large, elegant and beautiful luxury motor that is said to have cost £2,000 to build, which was equivalent to the price of a large house at the time. No wonder only one was ever made. It is still in great condition too and can be seen at vintage car shows across the country.

The DAWB 6 Touring car was built in Belfast by engineer Davy Woods and motorcycle racer Artie Bell. It took eight years to build - they started in 1954 and finished in 1962. It features a six-cylinder engine and flush door handles and was nicknamed Davy’s Folly.

It is on display in the Ulster Transport Museum.

Of course, there were also loads of car assembly plants in Ireland.

And there you have it, from bubble cars to 17-foot cruisers, from Buncrana Beetles to Volkswagen Beetles, Ireland certainly has an interesting and varied car manufacturing history.

Back to the future…

Whilst Ireland may not be manufacturing cars anymore, it still plays an important role in the motor industry worldwide.

For example, in Carlow, Autolaunch Ltd supplies assembled components such as interior lighting units to car manufacturers mostly in the US and is the sole provider of bumpers for Bentley cars worldwide.

Valeo Vision Systems, with plants near Galway and Tuam, is the world’s leading provider of driving assistance systems for BMW, Jaguar/Land Rover, Volvo, Ford, Nissan and the VG Group (VW, Audi). It was the first to market in Europe with rear camera and surround view systems and it also produces autonomous driving products. Would you drive a car with no wing mirrors? Well, if Valeo has its way you may well be doing that, soon. It has developed a system called Sightstream, which basically does away with side view mirrors and replaces them with high-definition cameras, which can be viewed on a screen. Hurrah, no more broken wing mirrors.

Mergon International in Westmeath is one of the world’s leading providers of blow and injection moulded products. That means items like windscreen washer systems, air ducts and electric vehicle battery cooling systems. There's a little bit of Westmeath in Audis, BMWs and Teslas.

By engineering electric vehicle components, autonomous driving system and advanced safety equipment, Ireland is helping build the cars of the future and makes a vital contribution to the world's motor industry.

Telematics: What’s in It for the Average Motorist?

What value can Telematics have for the average motorist and what impact will it have on the car insurance industry and on customer premiums.

Driverless Cars - The Model T of our Generation?

The most disruptive innovations don’t happen overnight. Like the Modal T, driverless cars may be one such innovation.

Your Vehicle and Your Car Insurance Premium

Ever wondered about role your vehicle has in determining your insurance premium? All the key information is explained here.